A Cornucopia of Thanksgiving Food Facts 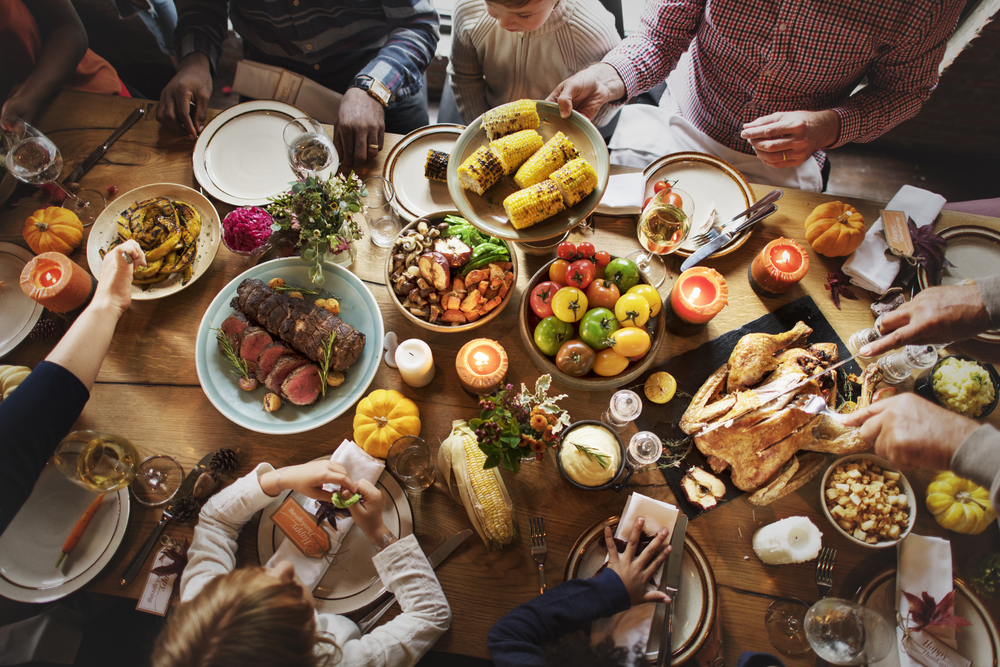 Thoughts of tasty stuffing, second helpings of sweet potatoes, juicy turkeys, and pumpkin pies are swimming through American heads in the weeks leading up to Thanksgiving, and we simply cannot wait to dig in.
Here are some fun and amazing food facts to ponder as you sink your teeth into your Thanksgiving feast this year.

1. Did you know that TV dinners were created because of Thanksgiving? In 1953, Swanson turkey farms seriously overestimated how many turkeys would go flying off the shelves for Thanksgiving. With nearly 26 tons of frozen turkeys not bought, a Swanson employee came up with the idea of serving up those leftover turkeys as prepackaged meals, sides included. And just like that, the TV dinner was born!

2. Overeating and Thanksgiving go hand-in-hand, but few people actually know just how much they are consuming when they treat themselves to an extra slice of pie. The average American eats a whopping 3,000 to 5,000 calories during a single Thanksgiving meal.

3. Interesting side note: To burn off the 3,000 calories you just ate, a 150-pound person would have to run a marathon—literally! It would take nearly a 30-mile run to burn the calories consumed during a Thanksgiving meal.

5. You have probably heard that eating too much turkey can make you sleepy. L-tryptophan, an amino acid that our bodies absorb from the food we eat, has been labeled as the culprit for your desire to nod-off after eating three helpings of turkey and a volcano of mashed potatoes and butter. This myth is only partially true. Yes, tryptophan makes you calm, relaxed, and sleepy. However, while turkey does have tryptophan in it, it does not have a greater amount than any other protein. You would feel just as sleep after eating chicken, pork, or beef.

6. Stuffing is almost as old as civilization itself. Stuffing dates back to the 4th Century CE, and it honestly hasn’t changed much since. Stuffed chicken, stuffed rabbit, and even stuffed mice were all the rage back in Rome, and included grains, herbs and vegetables just like it does today.

9. Who’s calling the Butterball Turkey Hotline? About 100,000 people between mid-November and early December.

10. Thanksgiving, though said to be derived from the Pilgrims and Native Americans who broke bread in the 1621, is actually an amalgamation of several food-based traditions. Ancient harvest festivals, New England and British harvest celebrations, and Puritan Thanksgiving rituals all play a part in the design of what we now know as Thanksgiving.